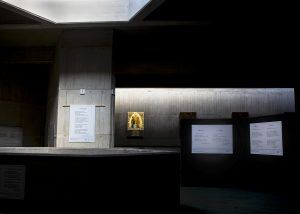 Here is a link to some photographs of poems displayed, greatly enlarged,  on the walls of Clifton Cathedral in the Spring of 2019.

Just click on the first image and it will expand. Then keep clicking on an arrow that appears on the right of each picture, to take you through to the end of the series, at your own speed.

There is a slightly different selection of the photos brought together as a Facebook “Album.” If you are on Facebook you can find it here.

Canon Bosco runs Clifton Cathedral and it was he who suggested that a balcony within the building, prominent but little used, could be used for an exhibition of the project’s poems. You will see from the pictures that the cathedral does not conform to a medieval, or gothic, stereotype. Built in the late 60’s and early 70’s, it is unashamedly modernist, even “brutalist” and I find it inspirational.

The poems seemed to belong there. They and the raw concrete etched with wood grain seemed to suit each other, even to speak to, and for each other. On seeing the exhibition up for the first time, someone exclaimed that it was like coming across a modern-day Book of Psalms in this place, in terms of its universality and complexity, its human cry.

A huge building, the cathedral was of course designed to act as an affirmation of the sacred in itself, even while it gives shelter to and informs a liturgy that serves the same purpose. I felt the exhibition was doing a lot more than use this huge and wonderful space as backdrop ; it was joining and adding to the statement it makes and the stand-point and tones of reverence it calls for.

And of course, the building, the faith it was built to embody and extoll, and the poems, all shared a vision of reality and human life in absolute contrast and opposition to our presentday lurchings and retreat into competitive nationalism, mutual suspicion, division and fragmentation.

I shall add three more details here, for anyone interested :

First, Clifton Cathedral is – as I have suggested – a wonderful building in itself, yet is off the beaten track. I recommend that anyone visiting Bristol should give some unhurried time to it.

Second, most of the exhibition’s poems were enlarged from the A4 pdf and printed onto a foamex board. The firm who did that work are based near Basingstoke and achieved a quick turn-around between order and delivery.  The board we used is a light and weather proof material, solid yet flexible. The process is surprisingly cheap.

Thirdly, the vast majority of the exhibition’s “public” consisted of the cathedral’s own congregation whose total number is close to a thousand. They come from all over Bristol and are multi-ethnic. Masses take place at the cathedral throughout each week-end and most people attend one or another of these on a regular basis, each week. Those who visited the exhibition tended to do so either on the way to their particular mass, or just afterwards.

Following the exhibition proper, Canon Bosco put up photographs of the exhibition’s poem-posters by the cathedral’s main door, to “show those who didn’t come what they had missed,” he said. 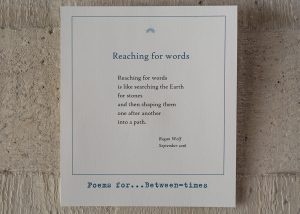